September 17, 2018 0 Comments by WAVE_Admin in Uncategorized 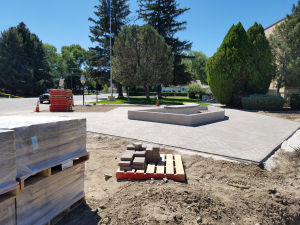 Haven’t placed any new news in a little over a week because nothing really new was taking place at the construction site.  Checked on the site on Friday evening and still nothing really new.  Then, this morning I received an email from our treasurer and sure enough when I went out the pavers had been placed and things are really starting to to take shape.  Not sure if all the pavers have been placed as yet since there are still 4 more pallets of pavers sitting there.

So, they have filled the interior of the monument with the large gravel and now the pavers are being placed.  The monument itself is expected to be delivered on/about September 20th.  We are also currently having the first 88 pavers, that folks have ordered, inscribed and will hopefully pick those up and start placing them next week as well.  When the monument is delivered it will go directly to the Douglas County warehouse were the preparation for its placement on the top/center piece will begin.  Once installed it will immediately be covered until the unveiling on October 6th at Noon. 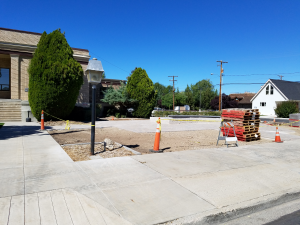 I do not know about any of you, but we here at WAVE are getting very excited.  It is hard to believe that almost 2 years worth of work are almost at an end.  BUT DON’T WORRY……..your folks at WAVE are already working on another major mission which they will announce to everyone after October 6th…..or maybe that day?   You will just have to wait and see.

Our next posting will not be until something really noticeable happens so look for something next week (about the 26th) for new pics and a little about what will happen on the unveiling day.  Be back soon! 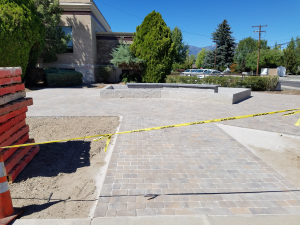 WE ARE GETTING CLOSER!

September 1, 2018 0 Comments by WAVE_Admin in Uncategorized 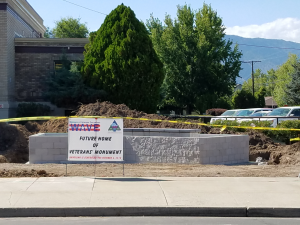 We are getting closer everyone.  I don’t know about any of you but I am starting to get very excited after almost 2 years of everyone putting this together.  Can you picture what it is going to look like?……..    The area around the center will be filled with large gravel and as soon as the monument arrives, the contractors will take the measurements from the base of the monument, and then start drilling into the top cap of the center piece to insert metal posts that the monument will sit on.   Then it will be time for the landscapers to come in and finish everything out, including the brick pavers being placed around the monument.  Last Thursday we delivered 70 orders to start the brick inscriptions and we will do everything in our power to make sure that they are placed prior to the dedication on October 6th……..can’t make any promises since we are getting to close.   I can tell you that to date, we have almost 80 orders for bricks…..get them orders in everyone.  Hope ya’ll are having a great Labor Day Weekend.   This will be it for the updates until we see a major change…..such as placing the monument or the landscape starting to be done, but we will be back and hopefully with a video interview with Jim Madsen and John Milazzo explaining what is happening and why. 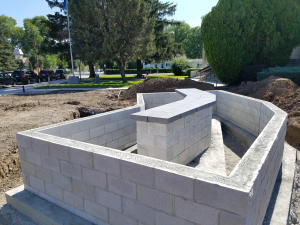